These words were written by Joni Mitchell in the 1960’s to reflect a young man’s rite of passage but she could have been predicting the fate of Hen Harriers. Unfortunately despite decades of protective legislation Hen Harriers have no rights, they hatch, they fly, they disperse and then they ‘disappear’ on land used for driven grouse shooting.

They hatch, fly, disperse and ‘disappear’ – the circle game is complete for another season. Another season in a long line of such seasons; round and round we go and nothing changes. 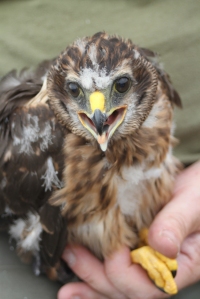 NERF members found the nest in the Peak District from where Octavia would fledge and our members also found the nest in the Scottish Borders from where Hilma would eventually fledge. NERF members monitored the nests throughout the season, fitted rings to the chicks and later fitted the satellite tags. Endless voluntary hours, committed over many months, to ensure that the cohort of 2018 had the best possible start to their lives – a future flying free.

The satellite tags fitted to Hen Harriers are phenomenally robust and reliable and they showed no evidence that there was a problem with any of them before they all catastrophically failed. But what about the chicks that were not tagged? It doesn’t take crystal ball gazing to envisage that these three young birds are the only ones to have suffered from the same fate already this year. Undoubtedly there will have been others, perhaps a higher number, so here we go again round and round again in a never ending circle of death and destruction; Hen Harriers sacrificed at the altar of Red Grouse shooting.

There is no point in asking ‘how long can this go on; when will the killing stop?’ because it will not stop until Defra and Natural England deal with the raptor related criminality with the ferocity that it deserves. Regrettably that’s not on the agenda today or for that matter for the foreseeable future. Hen Harrier reintroduction schemes and brood management schemes are not the answer. We know that, the shooting industry knows that and the Government knows that. The problem is that the Government is wedded to these ridiculous schemes. Lord Keynes said ‘when the facts change, I change my mind’. He didn’t say no one else should change theirs when the facts change and it is self-evident that the Government needs to change its mind and work towards a realistic solution to reinvigorate the remnant English Hen Harrier population by directly dealing with the problem at source.

It is clear that many of the individuals involved in the shooting industry have no respect for the law and they will never give up their hatred of birds of prey. It is also self-evident that the organisations representing the industry have no control whatsoever over the criminal element that pervades the industry and yet Defra and NE continue to treat them as ‘partners’. They are not part of the solution, they are part of the problem, unable to deliver anything to prevent the massacre of our natural heritage despite their never ending proclamations to the contrary.

Here we have evidence of another litany of missing Hen Harriers and undoubtedly more young Harriers will join the ‘disappeared’ in the near future. Once again NERF is calling on the Government to licence driven grouse shooting. Will the Government listen? Will the Secretary of State do the right thing and give the appropriate, overdue instructions to his Civil Servants to set the process in motion? We doubt it.

More Hen Harriers will be killed. Will we ‘go round and round again in the circle game?’ No doubt we will.