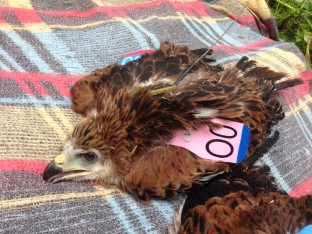 On Friday 17 April 2020 the Red Kite ‘KK’ joined the long list of raptors that have ‘disappeared’– on a grouse moor.

In June 2019 NERF members, the Friends of Red Kites [FoRK] based in the North East of England, arranged for a Red Kite chick to be fitted with a satellite tracking device. The chick was named ‘KK’ in tribute to one the FoRK volunteers. The bird was also fitted with wing tags bearing the ID number 00, one of which can be seen in the photograph. After the tag was fitted the data it provided was monitored and mapped by the RSPB.

Red Kites are extremely placid birds of prey, a delight to handle as chicks and a beautiful graceful bird to watch gliding across open country. They are largely carrion feeders, scavenging on dead animals, cleaning up the countryside. They do not pose a threat to the shooting industry and yet in some quarters they are vilified for the sole reason that they a member of the raptor family.

During the remainder of 2019 KK toured the North of England as far south as the Peak District before returning to the Derwent Valley, Tyne & Wear.

In common with our extensive experience of other satellite tagged birds, KK’s life followed a pattern that we have seen with all too regularly. The tag worked perfectly and then without the warning signs that we would expect to see from a tag that is nearing its natural end of life the transmission suddenly and inexplicably stopped.

That the last fix, prior to the ‘stop no malfunction’ located the bird on a grouse moor near the Derwent Reservoir, in County Durham. Despite an extensive ground search being carried out by a very experienced team, using sophisticated equipment, the body was not found. These facts will not come as a surprise to those of us who follow these cases closely. Natural England’s Hen Harrier data reveals that satellite tagged birds are 10 times more likely to ‘disappear’ when the tag fails without warning when the bird was on a grouse moor at the time [Murgatroyd et al]. Data already in the public domain indicates that Hen Harrier chicks satellite tagged as part of the RSPB’s Hen Harrier Life Project reveal a similar pattern.

This is not the first Red Kite to ‘disappear’ in the Derwent Gorge area and the quote from Harold Dobson, spokesman for the Friends of the Red Kites, tell us all we need to know:

“Since 2010, seven red kites have been found poisoned or shot near the Derwent Gorge and surrounding Durham Moorland. We fear that this may be the tip of the iceberg and that many more persecuted kites are never found.”

“The abrupt loss of an otherwise reliable signal from this carefully tracked bird is of great concern. The original Northern Kites release project and later our colleagues in Friends of Red Kites have all worked tirelessly to establish a viable population of these magnificent birds in our region. Local success has brought pleasure, pride and enjoyment within the community but expansion of the breeding range is now overdue. The loss of this bird in suspicious circumstances, in the same area as other known persecution incidents of Red Kites, reflects an appalling situation and is surely indicative of how selfish criminal activity is holding back the population.”

From the moment that the Government announced the Covid – 19 lockdown Raptor Workers have been expressing concern that raptor persecution would increase significantly after we were, for understandable reasons, prevented from surveying and monitoring birds of prey. This is not an unreasonable fear, we saw a similar pattern in 2001 when access to the countryside was banned during the Foot and Mouth outbreak.

Is KK Covid – 19 collateral damage, or was this bird already destined to join the long line of birds that have ‘disappeared’ on grouse moors irrespective of the current pandemic?

The RSPB press release can be seen here [link]

Alternatively, if you have information about this case or of other birds of prey being killed or targeted you can call the RSPB’s confidential Raptor Crime Hotline on 0300 999 0101.

NERF has been a member of the Raptor Persecution Priority Delivery Group [RPPDG] for 10 years, working tirelessly to monitor and protect birds of prey in the North of England.

Between 2015 and 2019 NERF partnered the RSPB Hen Harrier Life Project committing an extraordinary amount of voluntary time monitoring Hen Harriers at roost sites during the winter and locating and protecting nests during the breeding season. During the lifetime of the Project NERF members committed almost 15000 hours monitoring Hen Harriers and travelled in excess of 150,000 miles to and from the roost and nest sites. The value of NERF’s contribution to protecting Hen Harriers has been formally acknowledged by Superintendent Nick Lyall, the National Chair of the RPPDG, who has awarded NERF members a Certificate of Appreciation.

The citation on the certificate states:

“For your time, effort and commitment in providing your personal time and money in order to monitor and protect endangered Hen Harriers.”

NERF is a voluntary organisation and it is humbling to have our efforts acknowledged by Nick.