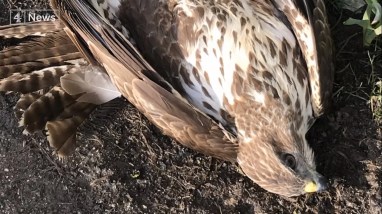 During the last three months the way that we live our lives has changed enormously and the phrase ‘New Normal’ is widely used by politicians, the media and the public when discussing the impact of the Covid – 19 pandemic. This ‘New Normal’ is how our lives will be affected for the foreseeable future. Regrettably if you were a bird of prey then for you lockdown could be described as ‘New Normal – Plus’.

We have witnessed high levels of raptor persecution, often associated with the game shooting industry, for decades and at times many of us believed that it couldn’t get any worse. How wrong we were. At the start of the Covid – 19 lockdown, which NERF supported, we warned that the level of bird of prey crime was likely to increase exponentially. It brings no comfort to realise that we were correct when making that prediction; not that it was difficult to predict an increase in persecution because we had seen a similar outcome during the Foot and Mouth crisis in 2001.

The seriousness of the problem was highlighted in a Channel 4 broadcast https://www.channel4.com/news/birds-of-prey-become-victims-of-crime 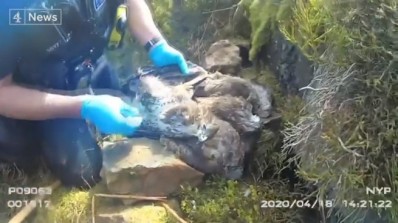 Five dead buzzards are pulled from a hole where they’d been hidden on a grouse shooting estate in Bransdale, North York Moors National Park

During the program Matt Hagen, Head of the North Yorkshire Police Rural Crime Team said, “All the shooting investigations that we’ve got going on at the moment are involving gamekeepers on grouse moors.”

The subject was raised again on the BBC local news program ‘Look Northwest’ (unfortunately the BBC Look Northwest links only last 24 hours so we can’t share this with you). During the program Howard Jones, RSPB Investigations Officer, said “Lockdown has kind of emboldened the criminals out there who want to kill birds of prey so they think with the restrictions that have been imposed there’ll be less people out in the countryside and there’s less chance of being caught”. He added, “In two thirds of the prosecutions that have ended up in court for bird of prey persecution since 1990, two thirds of those have been gamekeepers”.

If you are reading this article and were previously unaware of the level of bird of prey persecution these two statements, by very experienced investigators, tells you all you need to know about the criminality involved. It’s serious and organised crime in any meaning of the phrase.

There is ample evidence, reams of evidence, that some members of the game shooting industry form an ever present threat to birds of prey and yet the representatives of the industry continue to trot out endless statements of denial. During the Look Northwest exposé Duncan Thomas, the Northwest Director of BASC, said: “I really dispute these figures [number of raptors killed]. I would love to have a proper investigation in to exactly where they’re coming from. The RSPB are using birds of prey as a cash cow. It’s not proportionate, effective investigation, we must let the police get on with their job. We will expel anybody who is convicted of a wildlife crime of this nature”.

This is an outrageous statement from a Director of BASC, an organisation that is a member of the Police led Raptor Persecution Priority Delivery Group [RPPDG]. Rather than supporting the RSPB, the organisation which ironically is cleaning up the shooting industry, something that the industry is failing to do, by revealing the organised crime involved in some sections of the business, the industry continues to attack the hard working, dedicated and highly skilled RSPB Investigations Team.

Is the claim that the RSPB is “using birds of prey as a cash cow” BASC policy? Is it what the majority of their law-abiding members believe or has Mr Thomas gone rogue? The name RSPB spells out very clearly what its purpose is, i.e. to protect birds and that includes investigating the unlawful killing of birds. Would Mr Thomas, or BASC, make the same ridiculous statement about Victim Support, a charity set up to protect the human victims of crime? The ‘cash cow’ statement is ludicrous and will be seen as such by the general public, including, no doubt, many BASC members.

Interestingly on the BASC website Gary Doolan, Deputy Director of Communications and Public Affairs makes the following comment “For both programmes [Channel 4 and Look Northwest], BASC worked with other organisations in the background to ensure the messages we deliver to the audiences of those programmes are balanced and best represent the broad sweep of opinions within those organisations”.

There is a second comment on the BASC website that refers to the same subject “……………that hen harriers are being weaponised as a ‘cash cow’.

Perhaps the comment, made by Mr Thomas, that “The RSPB are using birds of prey as a cash cow” is BASC’s position statement after all.

Not content with attacking the integrity of the RSPB, some representatives of the shooting industry have previously launched despicable personal attacks on Chief Inspector Louise Hubble, Head of the National Wildlife Crime Unit and Superintendent Nick Lyall, the dynamic head of the RPPDG.

Attacks on Nick’s integrity are not new. The shooting industry representatives collectively walked out en masse when Nick brought additional conservation organisations in to the RPPDG. If the RPPDG is so bad, why did they all re-join? Perhaps the more pertinent question is, why were they allowed to return to the table? Constructive criticism is always welcome; however the constant attempt to undermine the RPPDG is intolerable.

The Raptor Persecution Priority Delivery Group [RPPDG] is a police led sub-group of the Partnership for Action Against Wildlife Crime. Chaired by Superintendent Nick Lyall, the RPPDG is charged with reducing raptor persecution in England and Wales. A similar group tackles the same issues in Scotland.

NERF has been a member of the RPPDG since the Group’s inception in 2009. As a result of our commitment to the RPPDG NERF was presented with the PAW Partner of the Year Award in 2014.

Members of the RPPDG are required to provide the Chairman with 6-monthly reports of their activities undertaken in support of the objectives of the Group. The NERF summer 2019 report is set out below.

During the summer of 2019, the Gateshead based Friends of Red Kites [FoRK] became full members of NERF and the Yorkshire Kites and the Washburn Raptor Monitoring Scheme / Yorkshire Kites Project became associate members / Advisors to NERF. Geographically the North of England extends to 37,331 km2 and NERF member groups operate in c60% of the region.

In common with previous breeding seasons, NERF members were extremely busy committing thousands of hours surveying the forests, in-bye and uplands for breeding raptors. The process includes surveying for ‘black hole’ species; in habitat that historically held breeding birds from which they are currently absent, or habitat which is eminently suitable for a particular species, but for various reasons (often related to persecution at the population level) either are not found or are significantly under represented. Despite historical absence it is essential that these areas are extensively covered during the pre-breeding season in order to produce continuing trend lines.

NERF is a partner in the RSPB Hen Harrier Life Plus and members were involved in surveying, monitoring, protecting, ringing and satellite tagging chicks throughout the North of England.

The results of the work undertaken during the breeding season will be published in the NERF Annual Review 2019.

It is worthy of note that all activities undertaken by NERF and our member groups are self-funded.